The topographical features of the surfaces in the semiconductor industry are an important source to gather information about possible failure sources or estimate success rates to improve the overall yield of the process. Therefore the investigation of the smallest surface features of silicon substrates, as well as patterned wafers can be found in a lot of applications throughout the industry.

One of the reasons is that a sample to be examined in a transmission electron microscope must be sliced thinly and thus ruined. The SPM technique images surface structures with atomic (height) resolution without the necessity of damaging the sample. A further reason is the kind of imaging offered by SPM microscopes, because the results are shown as a kind of three dimensional image (also in cases where only two dimensional information is evaluated). As this is the case with an optical microscope, it is very difficult to investigate the surface structure of a sample with an electron microscope. In order to measure a surface profile with the highest resolution, it is necessary to slice the sample. Moreover, an SPM operates without vacuum, and unlike electron and optical microscopes, it can measure other physical effects. This includes electrical properties, such as Kelvin Probe Force Microscopy (KPM / KPFM) or magnetic properties (Magnetic Force Microscopy, MFM). 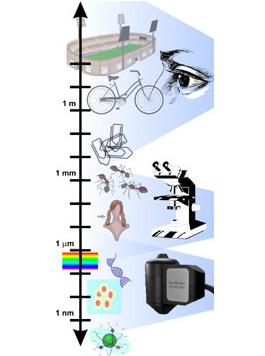 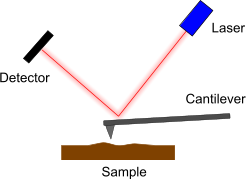 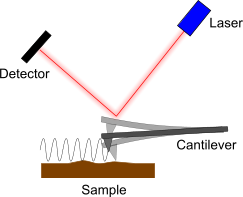 AC mode works with less interaction force than the DC mode and has some advantages:

To be able to detect magnetic forces, a cantilever is to be used, which is applied with a magnetic coating. Standard MFM tips have a magnetic coating with a relatively large thickness of around 40 nm. The high thickness results in a much larger tip radius of around 50 nm. This is much larger than that of conventional AFM tips. With these standard tips, the lateral magnetic resolutions of about 100 nm can be obtained. Therefore the magnetic resolution is much less than the commonly expected resolution from AFM topography measurements, which are a factor of 10 better. 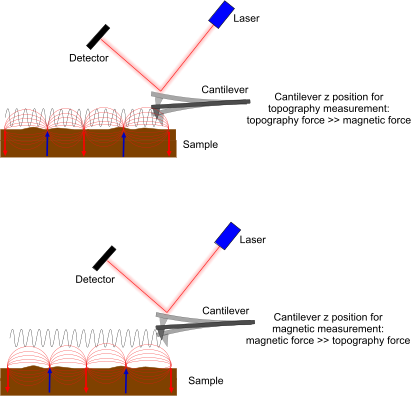 This mode is a method to determine the chemical potential between a cantilever and a sample surface, and therefore receive information about the material and the material state on a sample surface. The basic setup for a KPFM measurement is shown on the figure beside. The sample is electrically connected to the output of a frequency generator. This creates an oscillating electrical field between the cantilever and the sample, which can be measured by the position sensor of the AFM. This detected signal is then fed into a lock-in amplifier and its output is put into an integrator. The result is then added as a constant offset to the oscillation, which is applied to the sample. This acts as a feedback loop, which minimizes the electrically induced cantilever oscillation.

This method is used to determine the relative changes of majority carrier concentration of flat semiconductor surfaces. The capacity measurement is done quite similar to the KPFM measurement. You can use the same measurement setup. The main differences are that the output is coming from the lock-in amplifier, not from the feedback signal, so one uses the force component F2ω, described above at KPFM, which is proportional to the capacity C between tip and sample surface.

A KPFM measurement of the electrostatic force without a nulling feedback regulator is called EFM, electrostatic force measurement. Here, the feedback regulator is left out and the output of a lock-in amplifier is directly monitored. This measurement shows, as seen in the equation Fω derived above for KPFM, a mixture of different information and is influenced by the chemical potential, the oscillation voltages, the capacity etc. Therefore the EFM method is less useful for determining physical properties than the KFPM method.

The STM mode has the most simple principle and works only with conducting samples. A metall tip perpendicular to the sample surface is used instead of a cantilever. The tip as well as the sample are connected to a voltage supply. Now the STM tip is brought so close to the sample that a current flows, a so-called tunnel current. There is an exponential connection between the tip to sample distance and the current flow.
There are two variations for scanning: In the constant height mode, the height of the tip and the voltage is kept constant, while the tunneling current changes. For an images, this changes are translated to topography information. In the constant current or feedback mode, the tip is moved up and down to maintain a constant tunnel current, thereby the tip is moving in a constant distance to the surface. The necessary up and down movements of the tip are electronically recorded and can be displayed as an topography image.

Even though this principle is very simple, it instantly delivers the maximum possible magnification and allows the investigation and manipulation of individual atoms. The reason for this is a kind of self-focusing effect: The tunnel current responsible for the imaging already flows over the atom on the tip which is closest to the sample surface. So even when using a tip cut just by an ordinary pair of pincers one quite often gets atomic resolution.

The voltages used for STM measurements are normally below 1 V, since the electric field between sample and tip created by the fine tip is very large. An applied voltage of 5 V already results in a strong electric field causing a displacement of the tip and the sample surface. Actually, a 5 V pulse is often used for "cleaning" the tip.
The tunnel currents are on the nA scale, and the distance between tip and sample are in the order of magnitude of a few nm. STM measurements require that the sample surface is atomically "clean". In air, it is only possible to obtain atomic resolution for certain samples. The easiest atomic grid to observe is that of an HOPG sample (Highly Oriented Pyrolytic Graphite) since the top layer from such a sample can be removed by means of a piece of adhesive tape, revealing for a short time an atomically "clean" surface. Therefore, such samples are often used as test structures for STM microscopes; all DME STMs are tested for atomic resolution with a HOPG sample as a part of our internal certificate of complience (CoC) test.
The STM scanning is very fast; for atomic resolution images you can usually achieve a scan rate of multiple images per second.

In this method also an conductive probe is used. Operating in DC mode, an DC bias is applied and the electric current between the tip and the sample is measured. The resulting resistance is caused by the spreading resistance and resistivity of the sample which also give information about the carrier distribution.

Note, that you have to scratch the surface of the sample with the tip to get a better electrical contact. 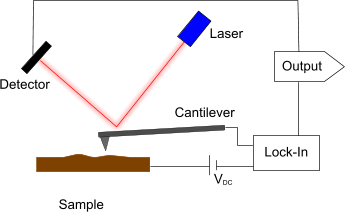 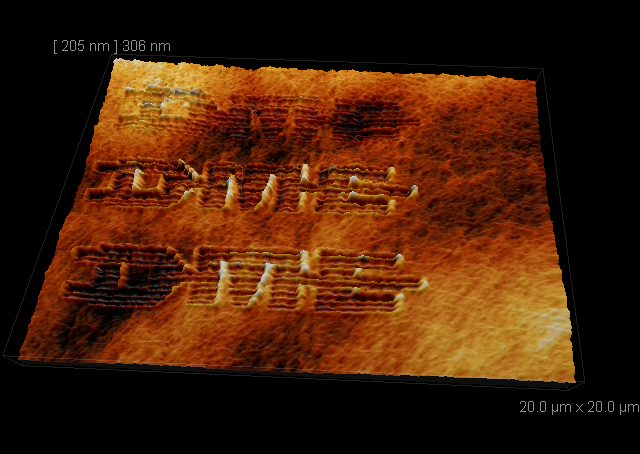 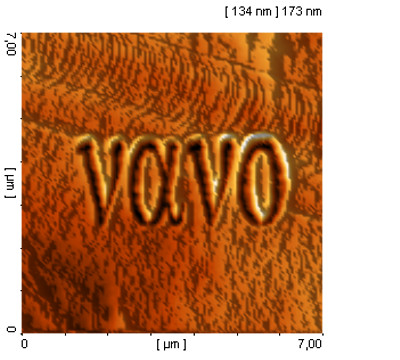 The typical radius of SPM sensors is in the order of 10 nm. So it is possible to perform lithography on a scale of only a few nanometers.
Doing a lithography means that physical or chemical properties of a sample's surface are being changed. This can be done in three different ways:

Whereas (1) is done by classical light or e-beam lithography, methods (2) and (3) can be performed by an SPM.

The main idea of the SPM program lithography function is to transfer the information of a bitmap via physical properties like a force, a voltage or a current to the surface. Depending in which mode (AFM-AC, AFM-DC, STM) the SPM is running, the physical property can be a bias or a current (STM), a force variation (AFM) or voltage at the auxiliary port of the controller (all modes). The Aux voltage can be converted into many other physical properties using external equipment.

Assume the surface of an AFM tip to about 100 nm2. If a tip with a force constant of 50 N/m is pressed 200 nm towards the surface, the resulting force equals about 10-5 N. The pressure applied to the surface is of about 100 GPa. This means that on almost any surface softer than the silicon tip, patterns may be scratched into the surface.

For more information read about the Scanning Probe Microscopy technology and  about application examples. 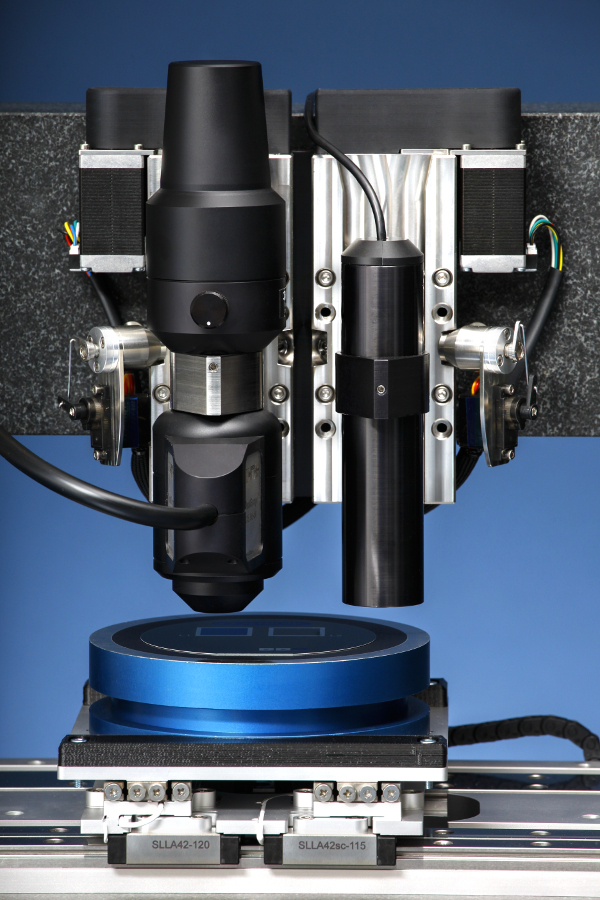 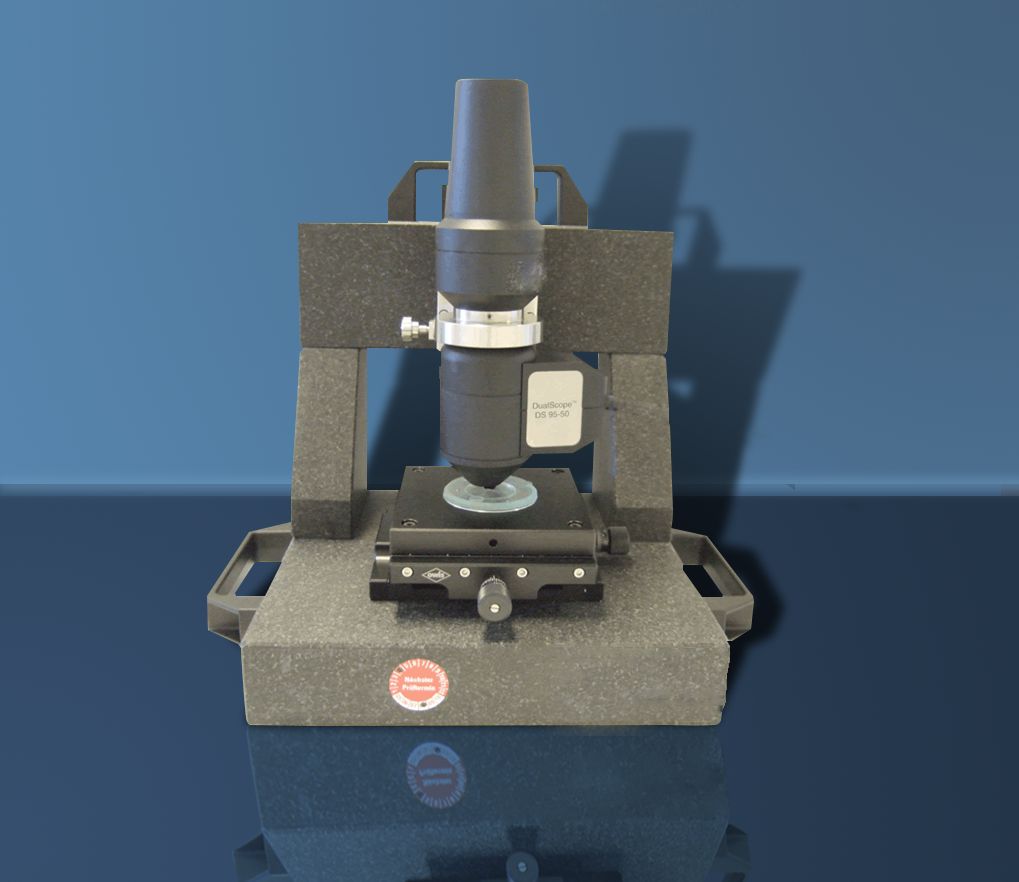 The DS-95 Compact Granite Stage provides the possibility of investigating nearly all samples by Scanning Probe Microscopy. From a splitter of a coated wafer to a whole nano-coated surgical implant, the compact granite stage will surprise with its flexibilty.
Thereby, the design makes no compromises concerning stability. 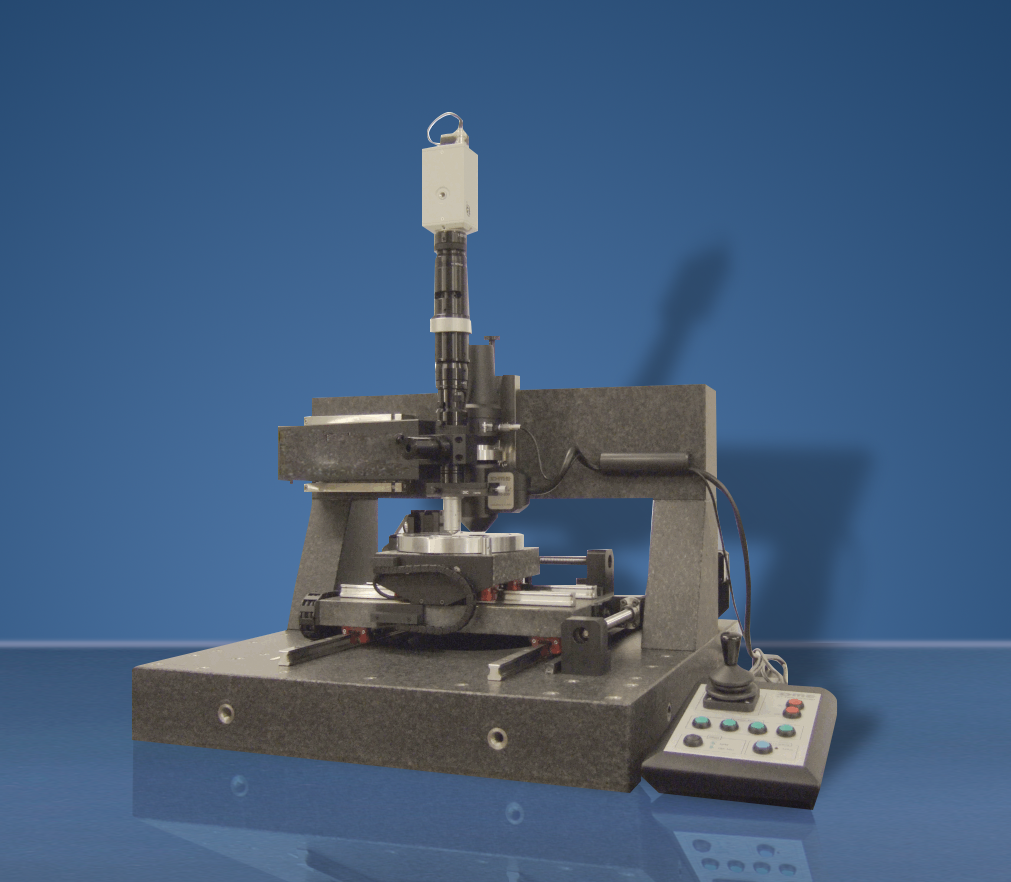 Its long range XY translators allow the investigation of 150 mm samples at all positions and up to 350 mm on specific sample areas. The fully programmable sample positioning enables autonomous SPM measurements on multiple sample positions with automatic image analysis and automatic report generation. The combination with high end optics enable on automated preselection of sample sites for SPM investigation.

Thereby the ProberStation 150 setup is the optimal solution for industry quality maintenance application and R&D environments. The unlimited space for custom or OEM integration of additional analytics equipment opens up new horizions for research application. 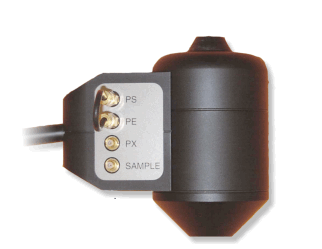 Upgrade your light microscope to subatomic resolution with AFM Objective: the 15x objective which delivers nanometer resolution and 3D topography.

The DS-95 AFM Objective in your optical microscope is the ticked for the world behind the defraction limit. The resolution is pushed far below sub-wavelength range to only a few nanometer or less. Additionally you benefit from the 3D topograpical data with a better resolution than CLSM ans STED microscopy.
Nano-manipulation and nano-lithography combined with the optical facilities of your microscope build a powerful combination. Because of the Semilab DME adaptor concept for the DS-95 Objective, the integration in all known microscope brands is possible.

Unchanged operation of hte light microscope with all its facilities is ensured.
Main application areas are microelectronics, material and biological sciences, etc.